The Coda API is a RESTful API that lets you programmatically interact with Coda docs:

As we update and release newer versions of the API, we reserve the right to remove older APIs and functionality with a 3-month deprecation notice. We will post about such changes as well as announce new features in the Developers Central section of our Community, and update the API updates doc.

Our Getting Started Guide helps you learn the basic of working with the API and shows a few ways you can use it. Check it out, and learn how to:

Coda's REST API is designed to be straightforward to use. You can use the language and platform of your choice to make requests. To get a feel for the API, you can also use a tool like Postman or Insomnia.

This API uses a base path of https://coda.io/apis/v1.

Each resource instance retrieved via the API has the following fields:

Most resources can be queried by their name or ID. We recommend sticking with IDs where possible, as names are fragile and prone to being changed by your doc's users.

Endpoints supporting listing of resources have the following fields:

The maximum page size may change at any time, and may be different for different endpoints. Please do not rely on it for any behavior of your application. If you pass a limit parameter that is larger than our maximum allowed limit, we will only return as many results as our maximum limit. You should look for the presence of the nextPageToken on the response to see if there are more results available, rather than relying on a result set that matches your provided limit.

While most object IDs will have to be discovered via the API, you may find yourself frequently wanting to get the ID of a specific Coda doc.

Here's a handy tool that will extract it for you. (See if you can find the pattern!)

The Coda API sets a reasonable limit on the number of requests that can be made per minute. Once this limit is reached, calls to the API will start returning errors with an HTTP status code of 429.

While edits made in Coda are shared with other collaborators in real-time, it can take a few seconds for them to become available via the API. You may also notice that changes made via the API, such as updating a row, are not immediate. These endpoints all return an HTTP 202 status code, instead of a standard 200, indicating that the edit has been accepted and queued for processing. This generally takes a few seconds, and the edit may fail if invalid. Each such edit will return a requestId in the response, and you can pass this requestId to the #getMutationStatus endpoint to find out if it has been applied.

Coda exposes a number of "volatile" formulas, as as Today(), Now(), and User(). When used in a live Coda doc, these formulas affect what's visible in realtime, tailored to the current user.

We make the Coda API available to all of our users free of charge, in both free and paid workspaces. However, API usage is subject to the role of the user associated with the API token in the workspace applicable to each API request. What this means is:

This behavior applies to the API as well as any integrations that may use it, such as Zapier.

To help you get started, this documentation provides code examples in Python, Unix shell, and Google Apps Script. These examples are based on a simple doc that looks something like this: 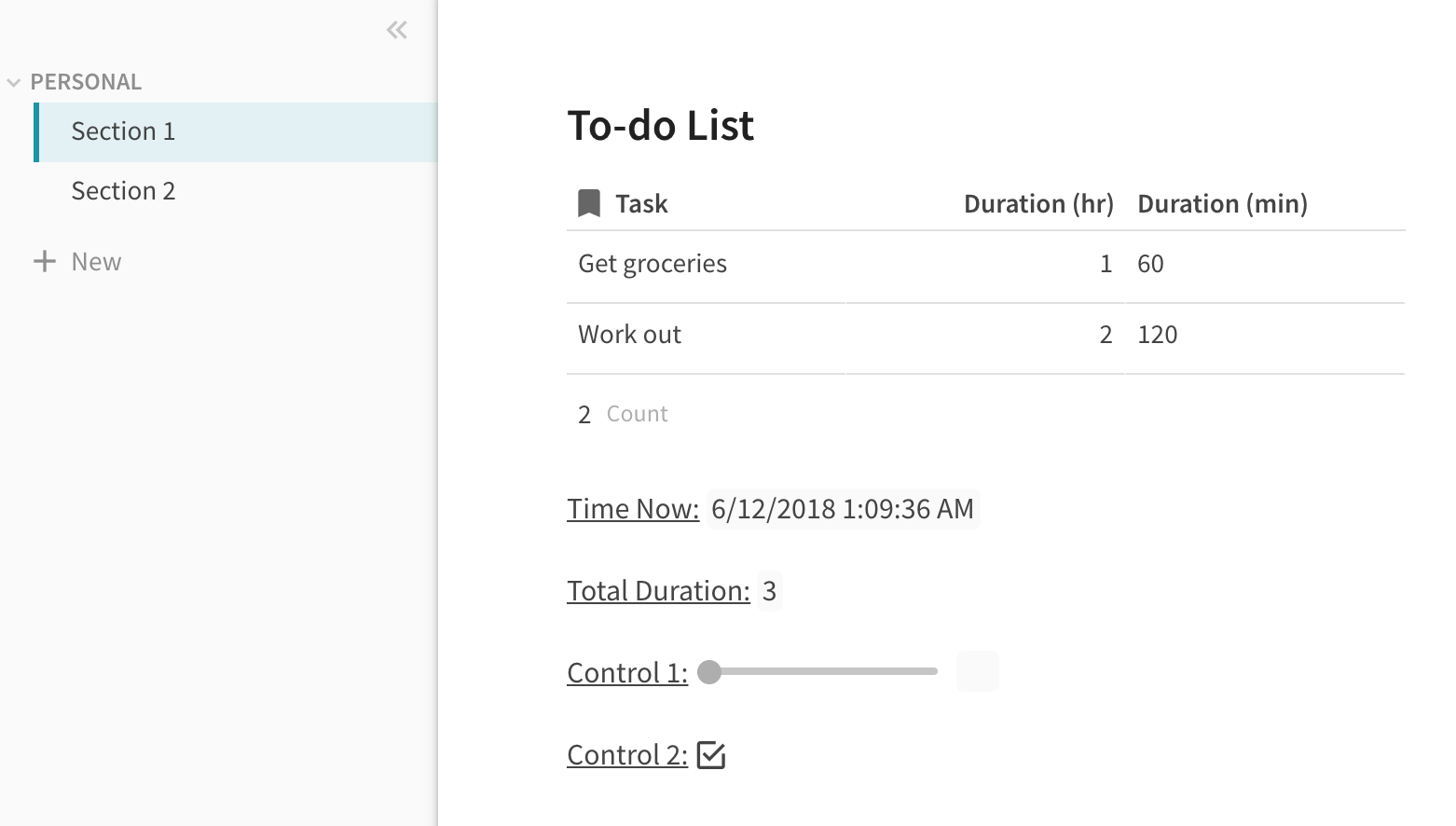 These examples use Python 3.6+. If you don't already have the requests module, use pip or easy_install to get it.

The shell examples are intended to be run in a Unix shell. If you're on Windows, you will need to install WSL.

These examples use the standard cURL utility to pull from the API, and then process it with jq to extract and format example output. If you don't already have it, you can either install it or run the command without it to see the raw JSON output.

Google Apps Script makes it easy to write code in a JavaScript-like syntax and easily access many Google products with built-in libraries. You can set up your scripts to run periodically, which makes it a good environment for writing tools without maintaining your own server.

Coda provides a library for Google Apps Script. To use it, go into Resources -> Libraries... and enter the following library ID: 15IQuWOk8MqT50FDWomh57UqWGH23gjsWVWYFms3ton6L-UHmefYHS9Vl. If you want to see the library's source code, it's available here.

Google provides autocomplete for API functions as well as generated docs. You can access these docs via the Libraries dialog by clicking on the library name. Required parameters that would be included in the URL path are positional arguments in each of these functions, followed by the request body, if applicable. All remaining parameters can be specified in the options object.

In an effort to standardize our API and make it accessible, we offer an OpenAPI 3.0 specification:

We also offer a downgraded Swagger 2.0 version of our specification. This may be useful for a number of tools that haven't yet been adapted to OpenAPI 3.0. Here are the links:

To get started with prototyping the API quickly in Postman, you can use one of links above to import the Coda API into a collection. You'll then need to set the appropriate header and environment variables.

Swagger Generator 3 (that link takes you to the docs for the generator API) can generate client libraries for these languages. It's relatively new and thus only has support for a limited set of languages at this time.

Swagger Generator takes in a legacy Swagger 2.0 specification, but can generate client libraries for more languages. You can also use local CLI tools to generate these libraries.

Some members of our amazing community have written libraries to work with our API. These aren't officially supported by Coda, but are listed here for convenience. (Please let us know if you've written a library and would like to have it included here.)

The Coda API can be accessed using an API token, which can be obtained from My account in Coda. This token should be specified by setting a header as follows.

Keep your token safe, as anyone who gets access to it can access your account. Once a token is created it cannot be viewed or modified, so don't lose it.

If you're logged into Coda, you can also query the API directly using your browser. Note that only GET endpoints are supported; for anything else, you'll have to use Bearer authentication.

The table below describes the types of authorization restrictions that can be placed on a Coda API token.

Coda API tokens can be restricted to the following types of objects.

There are a few special case methods that violate the above restrictions.

This feature is under development and we'd love to hear your feedback and bug reports. Please visit us at the Developers Central forum within the Coda Community.

Coda docs are foundational, top-level collaborative projects that contain pages. The API lets you list and search your docs to obtain basic metadata like titles and ownership information.

Returns a list of Coda docs accessible by the user. These are returned in the same order as on the docs page: reverse chronological by the latest event relevant to the user (last viewed, edited, or shared).

Creates a new Coda doc, optionally copying an existing doc. Note that creating a doc requires you to be a Doc Maker in the applicable workspace (or be auto-promoted to one).

Parameters for creating the doc.

Get number of docs for the user.

Returns the number of docs for the authenticated user.

Get info about a doc

Returns metadata for the specified doc.